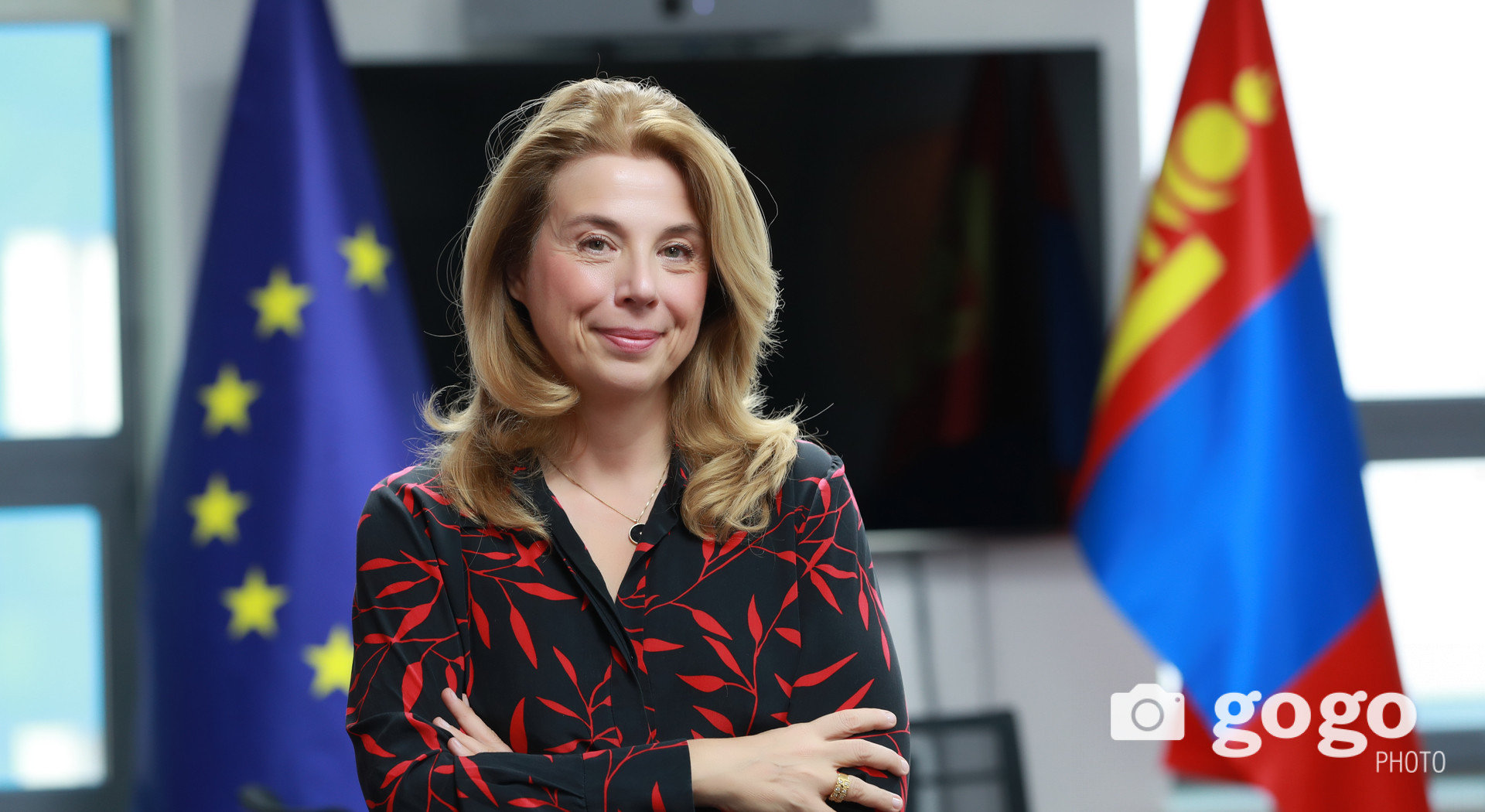 Via: Gogo.mn
Written by: B. Nyamdari
Captured by: Gogo photography

Ambassador Axelle Nicaise recently presented her credentials to the President on November 8 and has recently taken up his post as the European Union's Representative to Mongolia.

She has been with the European Union since 1998 and has served in the EU's headquarters in Brussels, Kyrgyzstan, Ukraine and India for the past 24 years. Prior to his appointment to Mongolia, she served as Deputy Head of the EU Delegation to Vietnam.

"MONGOLIA IS AN IMPORTANT PARTNER IN ASIA FOR THE EUROPEAN UNION"

-  First of all, please accept our congratulations on your appointment as Ambassador of the European Union to Mongolia.
-  Thank you. I am very pleased to be appointed Ambassador Extraordinary and Plenipotentiary of the European Union to Mongolia. For me, I think the most important event of my career is to be in this position in your country, which has a long history and full of development opportunities.

- What is your first impression of Mongolia so far?
Although I have just arrived in Mongolia, I am impressed by three things, and first of all, I would like to say that I feel the friendliness of Mongolians step by step. Secondly, it is a vast steppe where Mongolia's natural beauty and freedom can be felt. I stared at the horizon, at the blue sky. Third, the extreme climate. Before I was appointed, I studied the harsh climate of Mongolia online, but when I arrived, I was impressed by the endurance of your people.

Recently, we visited Selenge and Darkhan-Uul aimags and launched the “Agricultural Management and Ecosystem Sustainability - STREAM” project. Within the framework of this project, we will work with partner organizations to improve forest land management and implement innovative ideas and innovations to support sustainable agriculture. At the 26th Conference of the Parties to the United Nations Framework Convention on Climate Change (COP26), the European Union will provide assistance and support in the fight against global warming and climate change in line with Mongolia's commitments.

- Please share with our readers of your objectives in Mongolia during your tenure?
- For the European Union, Mongolia is an important partner in Asia. Because I have personally observed that Mongolia has a geographical advantage, a people who have always strived to improve their development, and a person who is alert to anything new. It is also good that in the international arena, Mongolia has a common understanding that the European Union is its "third neighbor."

Mongolia's growth will be accelerated if it reduces its over-reliance on the mining sector and further diversifies its economy, and improves its trade with the rest of the world, especially with the European Union. In addition, the 26th Conference of the Parties to the United Nations Framework Convention on Climate Change (COP26) will support the reduction of carbon emissions by investing in renewable energy in line with Mongolia's commitments. I was deeply impressed by Mongolia's bold commitments around the world as all countries around the world strive to address these issues in a positive way for the future, no matter where they are.

Of course, it is difficult to imagine the modern world without cooperation in the field of e-transition and telecommunications, so I am confident that advanced technology, education and cultural cooperation will not be left out. We will continue to support Mongolia's democracy and the rule of law.

We hope to have the opportunity to visit your beautiful country, meet its people, and learn about its rich history, culture, and traditions as the pandemic situation subsides.

- The volume of EU-funded projects implemented in Mongolia over the past three years has increased from 12 million euros to 140 million euros. In what sectors and projects were they focused on?
-In the previous multi-year or medium-term program, the increase in grants from 12 to 140 million euros was a success. This is the result of the opening of a Permanent Representative Office in Ulaanbaatar in 2017, bringing closer cooperation with Mongolia to a new level. Our cooperation has expanded significantly, both bilaterally and regionally.

The program for 2014-2020 had two main directions. One is to strengthen fiscal management, and the other is to increase and diversify employment. The program has worked effectively with the Government of Mongolia at the national and local levels to improve the legal environment of the labor market and the quality of labor.

I would also like to mention the efforts of my former ambassador's experienced and skilled team to improve the conditions and capacity of the private sector to create value-added jobs by strengthening value chains such as meat, dairy, cashmere, leather and vegetables.

*Highlight interviews are articles written by media outlets and are presented on our website with credentials and in partial format.